A wonderful serenity has taken possession 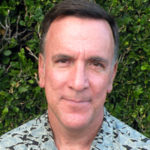